5HTP vs. L-Tryptophan. If you’ve been dealing with insomnia for quite a while then you’ve read that these two heavy lifting supplements dominate the insomnia conversations in forums,  supplement reviews and so on. Experiences with them seem to be all over the board and people react to them differently. But in general these supplements are helpful when you’re dealing with low serotonin levels. This is usually accompanied by depression. Serotonin is a happy hormone, so if you’re low you are feeling a bit blue, a bit sad and it could certainly be contributing to poor sleep patterns via a chain of events inside your body. How does this happen?

The Serotonin and Sleep Connection

You need adequate levels of serotonin to help you calm the mind and invite restful states before you go to bed. Your central nervous system (CNA) can be either activated or deactivated; be stimulated or inhibited. Serotonin plays an inhibitory role in your CNA. However, someone who’s done some serious night clubbing can attest that MDMA (ecstasy) which releases a massive store of serotonin is anything but inhibitory. The experience is very intense but what happens 2 to 3 hours later?  You move into a chill room, right?  The experience becomes very relaxing. As a footnote: if you have done your share of MDMA then keep in mind this could very much be affecting your serotonin levels, leading to insomnia and depression.

There are some natural methods or supplements to raise your serotonin levels and improve your sleep. A thing to keep in mind is that if your insomnia does not have its root cause in low serotonin levels then these supplement won’t have the desired effect. That’s why you have these different people on forums arguing about the efficacy of various supplements: “This shit is great!,” “Oh it’s total crap, it’s not effective,” and this happens because their biochemistry is different.  There’s a ton of root causes for insomnia and low serotonin is only one of them.

L-Tryptophan which is an amino acid found in most dietary proteins like meat, poultry, milk, yogurt, egg, fish, banana, peanuts, and so on so if you’re eating all these foods you should be having enough serotonin unless you have problems with your liver because it is up the the latter to convert L-tryptophan into serotonin.  This is why L-Tryptophan is considered to be a ‘precursor’ for serotonin – a neurotransmitter.

Not that it matter so much but it is said that the chain of conversion goes like this: L-Tryptophan > 5-HTP > Serotonin > Melatonin. Your body intelligently controls the amounts and levels of each and triggers conversion at the right time of the day and night. 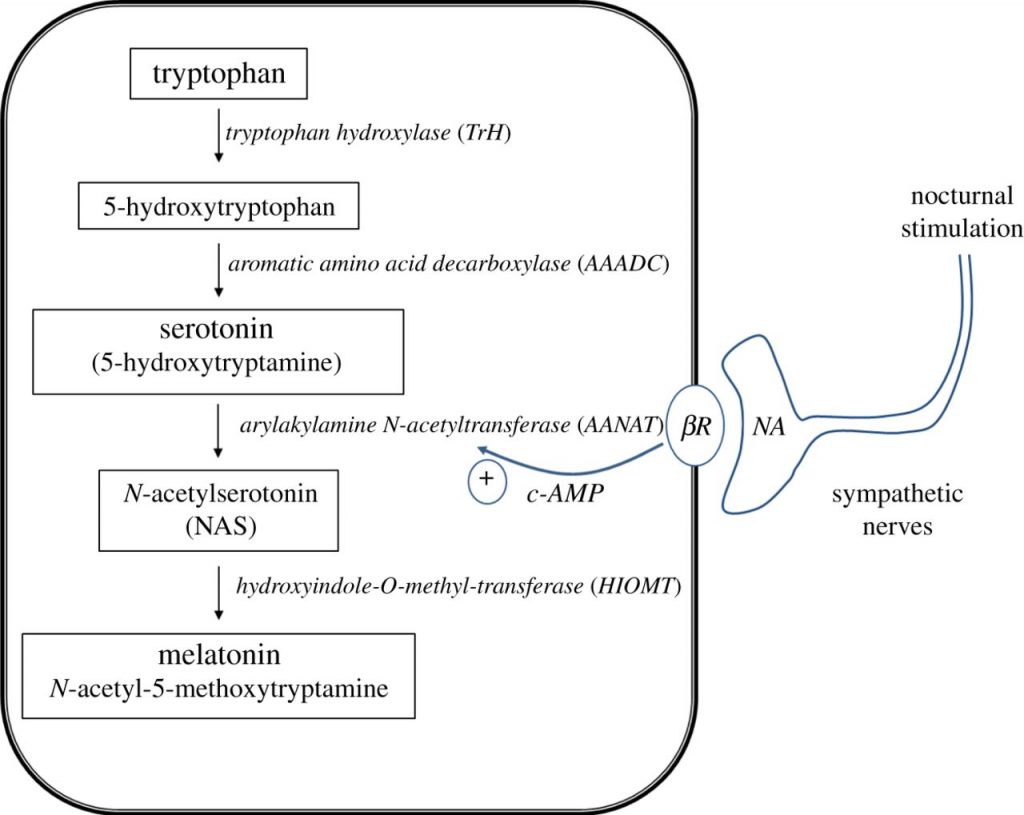 As already mentioned, 5HTP is a precursor for serotonin and an intermediate in the synthesis of melatonin. Often marketed as a supplement for sleep and antidepressant 5HTP has god reputation against insomniacs, mainly the types who suffer from depression related sleep issues.

Compared to L-Tryptophan, 5HTP does not need to go through the liver. Some people have leaky gut related inflammation which messes with our neurotransmitters (via gut-brain axis) and some have methylation issues and have trouble producing the enzyme that converts Tryptophan to 5-HTP.  It is in these cases when 5HTP can be more effective in raising your serotonin levels than L-Tryptophan.  With that, however, also comes the danger of oversupplying your body with seratonin, which can be just as detrimental as the lack of it.   It is highly discouraged to take both supplements because it can dramatically increase your serotonin levels to up to the point of being serotonin toxic.

When I tried 5HTP sometimes it worked sometimes it didn’t. I normally took it in the middle of a night after waking. Sometimes I would get this really deep sleep but it would be accompanied by some wacky dreams. Next morning I’d wake up feeling woozy; I just didn’t like it. It just felt like wasn’t the right thing for me.

As a contrast, L-Tryptophan gave me no side effects but it wasn’t very effective. First few nights I tried it together with GABA, which is another central nervous system inhibiting amino acid. It actually worked really well and I had some really restful sleep so I said: “Bingo! I found my cure.” I thought I must had been low on serotonin levels. But it only worked for a few nights and then insomnia came back. Was sad but not surprised as I am one of those with who experiences paradoxical effects with most supplements.

As a final note, I noticed a slightly different sexual function while taking L-Tryptophan and GABA so I Googled it. Lone and behold it kind of works a bit like SSRI which desensitizes certain excitation reflexes (if you know what I mean here). This gives you a bit of an edge in bed (if you need it) and you can last longer, which I think most guys will only welcome this ‘side effect.’

If you haven’t tried L-Tryptophan or 5HTP yet then it’s a definite recommendation.These two are often touted as some of the most helpful supplements for insomnia.

How to Take It and Correct Dosage

Don’t take them both at the same time so you know which works best for you. Try L-Tryptophan by taking 1000mg about an hour before you go to bed.  Some people also take it in the AM for mood support. Key advice here is to not overdo it. Start with the above recommend dose for a few nights and see what kind of effect you get.

Two pieces of advice about taking L-Tryptophan. First, take it away from protein heavy meals this amino acid will compete with other amino acids for the same receptors in your brain.  It’s usually not an issue but since we’re trying to maximize our Tryptophan intake for melatonin conversion processes we want to give it an easy pass.  Second, take it with a carbohydrate such as fruit juice. The latter raises insulin levels which works like a delivery method of Tryptophan into the nervous system.

Please keep in mind, supplements only help to manage insomnia, they do not ‘cure’ it. This is evidenced by the fact that insomnia rebounds after stopping the supplement. So what I always advise is to dig deeper for the underlying cause of the imbalances in neurotransmitters.

There’s something in your biochemistry that is preventing natural production of serotonin and melotonin. Or perhaps, as I’m sure it is in my case, there’s plenty of serotonin but other underlying issues override the calming effects that I naturally get at bed time. Something else is irritating the brain and the nervous system. This could be anything from inflammation, methylation issues, heart issues, digestion issues, toxic metabolites and hundreds other causes. The quest for answers continues…

Over to you… have you tried either 5HTP or L-Tryptophan? Leave a note, I’d be very curious to find out about your experiences.

How to Deal With Zolpidem (Ambien, Stilnox) Withdrawals Like a Pro With Gabapentin