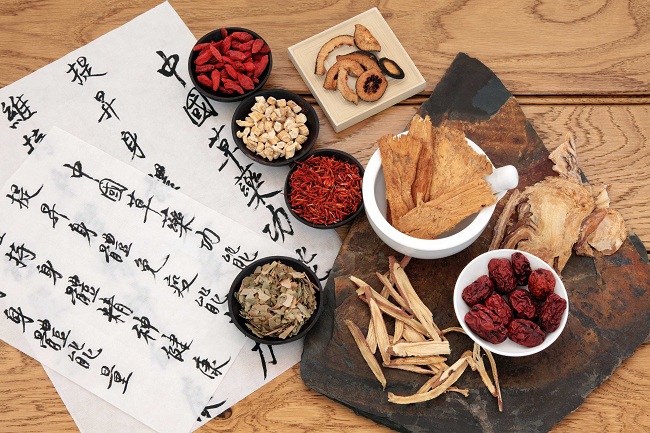 Poria Five Formula, aka Five-Ingredient Powder with Poria has been so helpful to me that I believe more people should be aware of its wonderful properties. This review is based on personal experience and my particular symptoms set.

While studying my condition from the Chinese medicine perspective I could not help but to be constantly led to conclusion that I have a serious spleen deficiency. Now, for those of you who haven’t delved much into TCM just keep in mind that ‘spleen deficiency’ is a wide encompassing term for various digestions issues, while ‘kidney yin deficiency’ is adrenal fatigue/hyper thyroid issues.

Spleen deficiency for me manifests as sluggish digestion, distention, bloating, inner coldness, strong preference for warm and cooked foods. Raw salad eaten in the evening was almost a guarantee for a sleepless night with multiple bathroom visits to urinate. Raw and cold foods induced either heat in my abdomen or chills in my core. On top of that I would feel stressed and restless. How is this even possible?

In Chinese medicine this points to both spleen and kidney deficiency. The two are very interrelated and you know this because adrenal fatigue is usually accompanied by poor digestion and various gut issues.This made me study and test various herbal formulas like Codonopsis & Astragalus, Codonopsis & Longan Combo, Six Gentlemen Decoction with Aucklandia and Amomum (Xiang Sha Liu Jun Zi Pian) that were specifically designed to nurture the spleen. However, much to my dismay,  I kept bumping into issues. My digestion and energy would improve during the day but my heat and insomnia would increase at night. I couldn’t get it – why do I tonify the spleen but my kidney yin deficiency acts up so bad? I also could not tonify the kidney yin as I later learned (also through a lot of pain and suffering) that most popular Yin tonics like Rehmannia and He Shou Wu are cloying and introduce more spleen ‘dampness’.

This made me ask the question: what the hell is in those spleen tonics that are exacerbating my yin deficiency symptoms, and is there a more gentle formula that could potentially tonify both my spleen and my kidneys without producing more dampness or deficiency heat at night? After studying the ingredients I realized there are two culprits in my formulas that had to be out: codonopsis and astragalus. Both are contraindicated for yin deficiency symptoms as both are strong qi tonics and are heating.

So naturally I was on the lookout for a formula that was more suitable and this is how I eventually discovered Poria Five (Chinese: Wu Ling San). 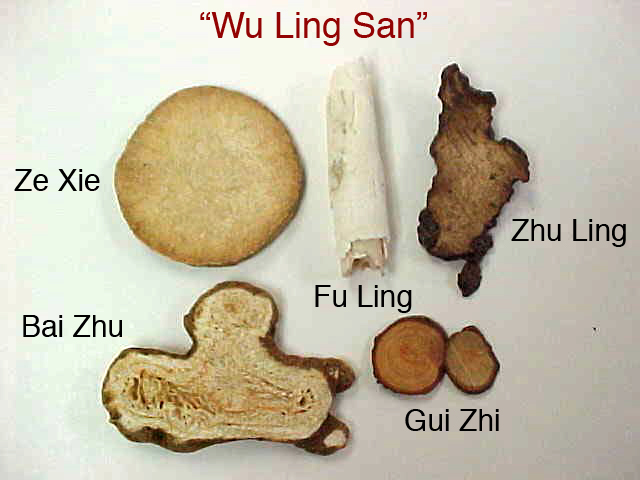 While searching online for “spleen deficiency and yin deficiency formula” I found an acupuncturist who was suggesting the use of zhu ling tang formula for spleen deficiency symptoms accompanied by kidney yin issues. Reason being is that most yin deficiency formulas are “cloying” on spleen, meaning they are hard to digest and can slow digestion. So zhu ling tang uses traditional spleen tonics like poria, herbals like polyporus and alismatis to dry out dampness and also ass hide, that’s ride, ass hide, aka donkey gelatin to nurture yin deficiency. The latter was a discovery of itself – gelatin is a  yin tonic?  Apparently it is and a very effective one.

I couldn’t get zhu ling tang shipped to Lithuania so I found its closest sister – Poria Five (wu ling san). I figured I’ll skip the ass hide as it was hard to obtain and just add regular organic gelatin. So that’s what I did.

Why am I adding gelatin?  Because Poria Five is a drying formula (warms the yang) due to its diuretic herbs. To combat this and to nurture fluids we need a gentle and easily digestible yin tonic – gelatin.

First time I took the formula I noticed I didn’t have to get up to urinate that night. Second day I took it before bed but that was a mistake as I woke up two hours later and peed like a fireman’s horse. OK – no good before bed time. As I experimented with it I found it was best taken in the morning and second time before dinner which is about 6:00pm for me.

As I felt warmer overall, slept a better and felt calmer I took the formula for several months. It was one of those rare fits for me that seemed to work long term. With time I also noticed I was able to tolerate raw foods better which was a very welcoming improvement.

As I studied the formula even further I discovered that the herbs in Poria Five help to increase general circulation of blood and body fluids throughout the body. Yes, I felt a diuretic effect but only once after taking the formula but  later on I didn’t have to pee as often even if I drank more fluids. This effectively took care of my frequent urination problem which apparently is a symptom of late stage adrenal fatigue/kidney jing deficiency (cold kidneys).

As months wore on and I started experimenting with other dietary changes I noticed I was becoming too warm during the day and night. Eventually, I realized I’ve addressed the deficiency and the formula has now become too warming for me.

Interestingly, this started happening when I began drinking fresh celery juice every morning. I read that it greatly boosts digestive health and I have to agree. Celery also contains very beneficial salts for adrenals so the juice works to support both – spleen and kidney deficiencies.  I highly recommend you to try it if you want to boost your digestion.

As for Poria Five, it will find its rightful place in my hall of fame after all this mess is over. If you have any questions or have tried this formula yourself please leave a comment. I’d be very curious to get your take.

Six Months on CBD Oil Report: Hype vs Benefits
Can Mercury Toxicity from Silver Fillings Be the Root Cause of Sleep, Fatigue and Gut Problems?