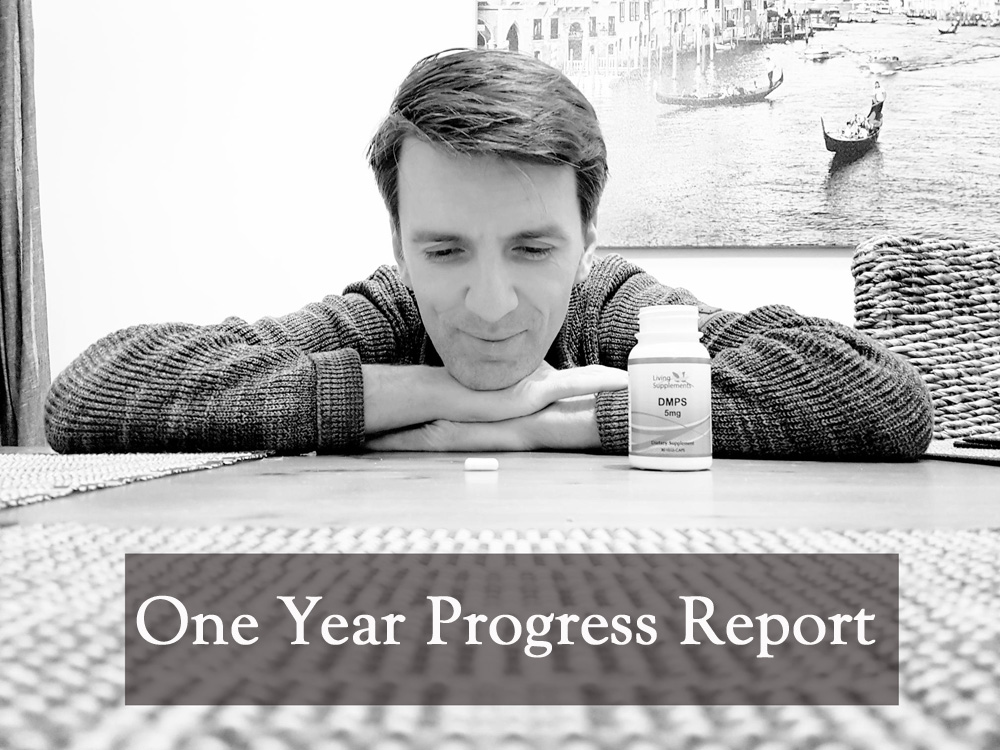 I have been chelating mercury for exactly one year now. If you are visiting this blog for the first time you need to know that it took me five years of hell and suffering to come to a conclusion that the root cause behind my debilitating insomnia and all the health issues is mercury toxicity.

Once I put all the dots together I researched for the best way to detox and learned that the Andrew Cutler method seems to be the safest and most reliable method up to date. So I had all my eight amalgam fillings removed December 2017 and started chelation on March 2018. You can learn about my initial symptoms and my chelation diary by following these links.

As of today I have done a total of 44 rounds. First five months was the honeymoon period, I mean it felt like a load of my shoulder and a naive thought crept in: “What if this was it? What if I won’t need to chelate because removing those mercury fillings was enough?” I was hardly visiting the ACC forum on Facebook, wondering what all the fuss was all about.

It is important to note that compared to some people, I started my detox journey in a pretty decent shape. Thanks to a QiGong practice I had learned and practiced for a year, adrenal crashes were a thing of the past. This gave me much more confidence to experiment with supplements. I knew that if things went South I would be able to regain control within a few days.

When commenced chelation things were going pretty smooth and I went from 15mg ALA, 5mg DMPS to 50 mg ALA and 12.5 DMPS in four months. And then I got stuck. Since June 2018 I’ve been on pretty much the same dosage. I did some 75 mg ALA, 25mg DMPS rounds but they were too rough and usually backfired in some way, mostly through overwhelming my immune system and making me catch some passing cold virus which would knock me out for at least a week. So now I count that I’ve been on similar dose for almost nine months.

August 2018 I started experiencing what seems to be the dreaded dump. This is a period when one’s inner organs start dumping mercury out. It started eight months after amalgam removal, four months since the start of chelation. I must admit that this whole dump phase is still a big mystery to me.

Dump feels strange for me and is very hard to describe. I just feel fatigue in my chest/abdomen, difficulty speaking, lethargy. Also, winter time traditionally brings its own set of symptoms because I am not able to take any Vitamin C, Milk Thistle and some of my herbal formulas because they are too cooling – I experience nasty chills in the evening and at night. So honestly, I still don’t know what symptoms are from the dump (if any) and what are from this harsh winter climate.

Overall, one year into it my results are very mixed and I can only say this on my blog: I have no clue which symptoms have been reduced due to my QiGong practice and which ones improved from from chelation. Some may say “Why do you care? All that matters is that you’re getting better!,” but to me it matters. I like to keep it somewhat “sciency” plus supplements cost a ton of money while QiGong costs a lot of time.

Anyways, here are my improvements overall:

Man, do we need to have patience here… unbelievable. Had it not been for the ACC Forum I would have quit this process already thinking it was not an effective protocol but reading all those stories and understanding the process has been immensely helpful.

Overall, the advice from other experienced chelators I get is that my progress is “about par for the course.” Some people just get linearly better while for other it is up and down and backwards and forwards. Another encouraging fact is that I am able to tolerate relative high chelator dosages during the dump phase.

Dump phase can last anywhere from one month to two years so I still have a ton of unpredictable future ahead of me. Next step is to check my thyroid again by doing a full panel of tests and see whether I can balance some hormones and minimize that fatigue feeling in my chest.

Are you chelating mercury? What’s your progress been like? What protocol are you using? Let me know in the comments.

Can Amanita Muscaria Mushroom Help With Sleep?
Can Supplementing Too Much Vitamin D Cause Insomnia?