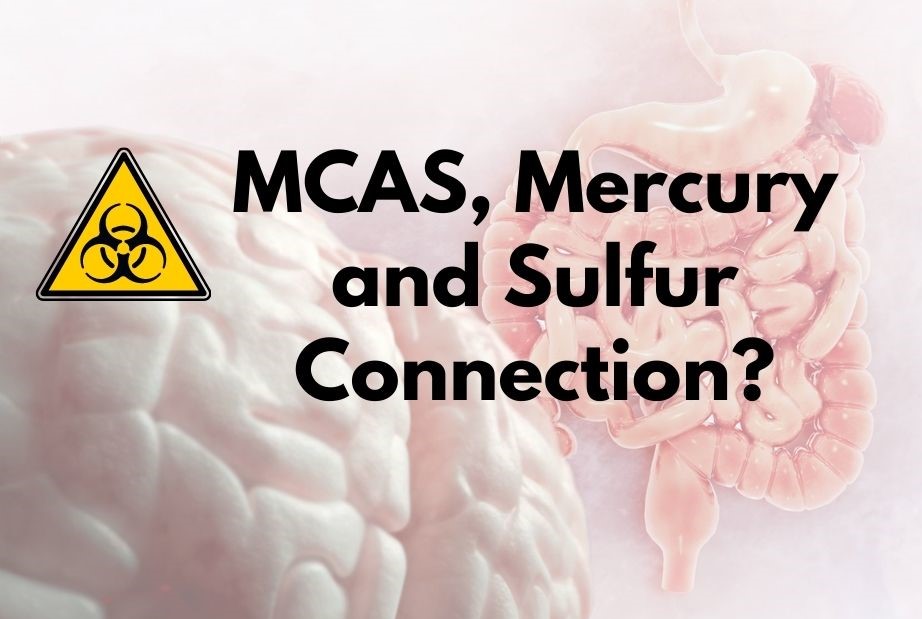 Are you one of the thousands of people who are trying to navigate a plethora of symptoms and exploring a connection between your immunity, genetics, and heavy metals like mercury? My world flipped downside up once I realized that the mechanism behind most of my misery is a so called “mast cell activation disorder” (MCAS), the root cause behind all of it is mercury and sulfur thiols are the suckers that inflicts most of the pain.

My MCAS symptoms are not related to skin. Apparently, most MCAS disorders do not manifest outwardly on skin but instead produce a plethora of symptoms internally. This is why this darn thing is so difficult to diagnose and can takes years before one actually arrives to this conclusion. At this point I invite you to take my finding as observations and not as medical facts. If you have done some of your own research and grappled with these concepts for a while you might find some of this useful.

In this article I raise four questions:

1. What is mast cell and mercury connection?

2. What is sulfur thiol to mercury connection?

3. How sulfur rich foods can lead to a variety of symptoms because of mast cell activation?

4. What are best supplements to support yourself in this condition?

There is a growing awareness that sulfur can cause trouble for some portion of the populous. Most people believe that this is due to their “genetic weaknesses” for sulfur metabolism or those low in B6 and/or molybdenum. But reality is that the problem hides elsewhere. Something else is activating those gene mutations and causing out methylation issues and that “something” is heavy metals.

I have some genetic variations in MTHFR, CBS and COMT genes. As you know CBS if the one that has to do with sulfur pathways. Before I realized that I’m dealing with mercury toxicity I was studying up epigenetics and constantly tinkering with my methylation pathways. All my experiments backfired and made me feel worse so I had to look deeper. Suffering from a variety of symptoms I could not put the dots together until I finally figured out that they are all related to heavy metal induced organ toxicity. And only after about two more years I realized that almost all of them are related to mast cell activity.

Some studies show that mercury stimulates certain mediator release from human mast cells, and disrupt the blood-brain-barrier and induces brain inflammation. Another study states: “Activated brain mast cells can disrupt the BBB and further increase brain mercury levels.” Once the brain and other organs become toxic it opens a great Pandora’s box and pushed one into the abyss of suffering.

Thiols are a class of organic sulfur derivatives but some unaware people just call them “sulfur”.  I used to think I can’t tolerate sulfur but actually it is thiols that cause these issues. Thiols have a strong propensity to bond with mercury. There is a lot to be learned about single thiols, double thiols and mercury chelation but for now let’s just say this: foods are mostly single thiol and have a weak bond to mercury while certain chelators like DMPS, DMSA and Alpha Lipoic Acid are double thiol which are stronger and much better chelators. The idea here is simple a food source single thiols pick up mercury but are two weak to transport it out so it basically redistributes it by releasing it into a blood stream and be carried wherever else, including mast cells. This can produce a ton of symptoms. Most detox specialists online recommend high sulfur foods to detox mercury and this is where they are dropping a bomb.

My catch twenty-two always was: sulfur from various vegetables are crucial for both detoxification and mast cell support but if thiols mobilize mercury and aggravate MCAS then I am left out of options for “natural” sources.  Thanks goodness for people like Andrew Cutler who studied this problem and came up with a chelation protocol using other sulfur rich compounds already mentioned before.

So far my MCAS and mercury detox has been a fine act but what helped was:

1.       Religiously prioritizing sleep over ANYTHING else;

3.       Avoiding stress and balancing things like QiGong and nature;

6.       Low to full dose of antihistamine and low doses of benzos;

Supplement regiment: Vitamin E, selenium (selenomethionine), vitamin C, zinc, chaga mushroom extract, black seed oil, flax seed oil, bentonite clay, ginger works really well to calm down the stimulation.  B6 and molybdenum are supposed to be really beneficial for people with my condition but I don’t seem to do well on them now.

MCAS is a form of inflammation so best advice one could get is to focus on antioxidants. The way antioxidants have a beneficial effect is too evident for me. For the longest time I noticed I couldn’t chelate unless I took Selenium. Selenium not only binds with mercury but combined with Vit E makes a powerful antioxidant.

ALA too is a strong antioxidant but it also mobilizes mercury. However, while initially it causes a MC reaction eventually ALA itself calms mast cells down because of a strong antioxidant action and perhaps by clearing the extracellular (plasma) mercury levels. This would explain why the first night of my chelation round I would be hot and restless and two other nights on round I have some of the most restful sleep (even if I have to wake up to take a dose in the middle of the night). This also explains why during a chelation round I can better tolerate higher thiols foods: ALA picks up mercury and there’s less of it to interact with mast cells.

Now as you see, this is a pretty complex matter and most of this comes from pure trial and error. Perhaps I’m only scratching a surface figuring out this mast cells (MCAS), sulfur, thiol and mercury connection but I feel like I have a handle of it to the point where I’m making steady progress and chelating away with less bumps in the road.

Would be curious to hear about your experiences too. Please drop me a note in the comments.

How SIBO, Dysbiosis, Candida and Other Gut Issues Can Cause Insomnia
MegaSporeBiotic (Soil Based Biotic) Review for Insomnia and Gut Function – WARNING!